I read the above quote by some flash-in-the-pan band and had a chuckle. Of course we have jobs but the whole point is, it doesn’t dominate our lives. Work to live not live to work. Of course living in Brighton means *living*.

I walked my little beige pumps off today, dropping off flyers and posters for the signing and to be honest I was expecting several shrugs of shoulders with a vague wave of the hand towards some dusty shelf where other local events were being pimped. This is Brighton (and Hove actually) so how on earth could I have forgotten that there is nothing the people of this town like more than a person flexing their artistic muscle? Everyone was so friendly, interested and enthusiastic. Places where I had dropped off flyers on Friday had even run out and so I was able to top them up! Then of course there are the normal-amazing things that no-one blinks at any more…

I stepped into the +!_”)£* (name withheld so that I don’t get anyone the sack) pub and tentatively asked the manager if I could put some flyers on his shelf. He shook his head and said that it was a corporate owned branch so he really wasn’t allowed. I showed him quickly that they were only advertising me and my book (my book and I, heheh), which was a story weaved around the wonderful place we live in and a few (maybe) imaginary people who live in it. He nodded seriously and said that he was an artist so he’d let me get away with it this time. I asked him what kind of artist he was? A street artist, he replied. For anyone who doesn’t know, my main man in the book is a street artist who makes chalk drawings on the pavement. This guy showed me his art that he had some samples of on the wall and told me that he had an exhibition booked in Vancouver next month! He then gave me some sticky tape and told me to go put up a poster for good measure.

Now that is Brighton. It pretty much sums up everything I love about this place. It’s when you walk down a single street past the most amazing individuals who are doing their thing, their way, because they have experienced the freedom that this place allows them. I am very, very lucky.

As I’ve dropped about 400 flyers today, I shall drop another one here just in case anyone has forgotten. 😉 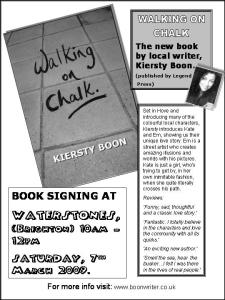 6 thoughts on ““We thought we’d move to Brighton because no-one there seems to have a job.””

© Kiersty Boon, boonwriter. Unauthorized use and/or duplication of this material without express and written permission from this blog’s author and/or owner is strictly prohibited. Excerpts and links may be used, provided that full and clear credit is given to Kiersty Boon and boonwriter, with appropriate and specific direction to the original content. email boonwriter at g mail dot com