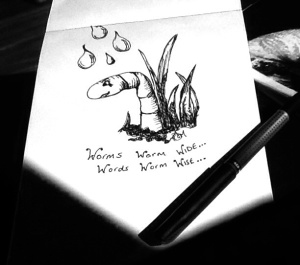 My first objection to authority was when I was 11 and, in biology class, we had to pour irritant on a patch of grass to make worms start to suffocate, forcing them to come up to the surface for air. I refused, got a detention and a clipboard to count the worms for everyone as punishment.
My second objection to authority was when I was 11 and, in PE, we were told to strip so that we could be weighed and measured. I refused and was told that would make it impossible for me to be identified if I was hit by a car and smashed to pieces. I was given a detention and allowed to leave my vest and knickers on. (Many years later, the PE teacher would be dismissed and prosecuted for indecent assault on pupils.)
It’s a long time since I was eleven. I’ve had a lot of ‘detentions’ imposed by people with ‘authority’.

This worm is turned,
Will quietly tunnel,
Silently shovel shit
And curl
Towards home.

© Kiersty Boon, boonwriter. Unauthorized use and/or duplication of this material without express and written permission from this blog’s author and/or owner is strictly prohibited. Excerpts and links may be used, provided that full and clear credit is given to Kiersty Boon and boonwriter, with appropriate and specific direction to the original content. email boonwriter at g mail dot com
Loading Comments...